types and subspecies, methods of reproduction and care

The subject of the article is the euonymus in landscape design. We will talk about what this ornamental plant is, what types and types it is, how to plant it and care for it properly. And let's start with the fact that in the fall almost all the plants fade, except for evergreens. In this regard, the euonymus, on the contrary, is revealed as never before. And it pleases with its appearance before the snow falls or, in general, all year round.

It should be noted that this plant is widespread in almost all continents. But each region has its own, so to speak, local species, which differs dramatically from others. Euonymus of all varieties combines one very surprising moment - the decorative filling of this plant is not colors, but leaves. This variety of colors and forms that persist even in the most severe frosts. The range of color palette from the traditional green to variegated colors.

The most amazing thing is that in the fall the foliage becomes multi-colored. What shades are not found here. There are in the Euonymus and seed box. Many confuse it with flowers, but it is not them. The box opens in the form of a flower, and rather large seeds are located inside. In this case, the box is painted in different shades like colors. That is why euonymus is so popular among landscape designers.

We will immediately make a reservation that this plant represents a huge variety of plantations. That is, it can be trees, bushes and, as their subspecies, bushes creeping along the ground. Now about the types.

First, this is an Asian type, which grows in the Far East and in some Asian countries. Its main difference is large seed boxes with petals up to 1.5 cm long. The color of the boxes is crimson. The large-winged species also has green flowers that form a branched, volumetric type of inflorescence. But the plant blooms in May.

In the Far East, this species is represented by nine-meter trees, in central Russia, trees no more than 3 m high grow, much like bushes.

This type of shrub grows in Japan, China and Korea. It has large oval leaves, seed boxes of pink color, and the seeds themselves are orange. In adulthood, the plant reaches up to 8 m. Although there are also small bushes with a height of 2-3 m.

It should be noted that this green plant still loves the shade. At the same time, it easily tolerates dry seasons. As for flowering, they are small white buds that spread a sour smell.

Today, breeders offer dwarf subspecies, which are often used to decorate plots as a green fence, curb. Some plant them in pots. Surprisingly, the Japanese dwarf euonymus is easy to prune, quickly restoring its decorative effect. It has a variegated design, that is, the leaves are greenish yellow. We add that the dwarf variety adapts well to any type of soil. At the same shrub unpretentious care.

This species is considered to be the root of Russia. It is shade-loving, and is often found in the lower tier of coniferous forests. The warty form looks like a tree up to 6 m high. But more often landscape designers use another subspecies that does not exceed a height of 1.5-2 m and is a shrub.

This species got its name only because all its stems are covered with growths, very similar to warts. Bushes bloom in May and bloom for almost a month. The flowers themselves are inflorescences on long legs. They are pink in color, with shiny seeds inside.

All experts agree that this species of euonymus is the most unpretentious. From it organize hedges, borders, they are planted as a plant located separately or as a group planting.

This species mainly grows in the European part of Russia, in the Crimea and the Caucasus. This light-loving plant with a height of 6 m in the shade begins to wither. It mainly grows in deciduous forests. There are trees and sprawling bushes. They are easy to form, can be used for landscaping urban areas.

Today the European variety is represented by a huge variety of proposed subspecies that breeders have grown. They differ from each other in color and shape of the crown.Here are some popular options:

It received its name only because its height does not exceed 1 m. This species grows in China, in the Caucasus and in some regions of southern Europe. It is one hundred percent shrub, although very similar to tall grass. This type of flowers fades away in one week, but the boxes of seeds stand before the snow.

This species received its name due to the size and shape of the leaves. They are flat with longitudinal formations. Therefore, something like wings or blades. Plant height does not exceed 4 m, but not lower than 2 m.

Flowers are green, three in each inflorescence. But the fruits are bright red. In general, this is an unpretentious plant:

Our site contains 183 villages with the best land plots in Moscow region in all directions. You can independently choose for yourself the best option, using the filters and set the desired distance from the Moscow Ring Road, the availability of communications and infrastructure, area, cost per hundred square meters. Or use the application form for selection and representatives of the exhibition "Low-Rise Country" will make an offer based on your wishes.

This plant came to Russia from China at the beginning of the 20th century. He was seated in gardens and parks of the Crimea and the Black Sea coast of the Caucasus. Today it is the most popular ornamental plant from the category "eosklet" in Russia. Reasons: endurance and a huge variety of colors. It can be said, the only plant from this category that is evergreen and withstands the harsh Russian winters.

Traditionally, it is lanceolate leaves and small flowers. Today, the so-called creeping species is very popular. Creeping euonymus in landscape design has been used for many years, but it received a peak in demand 10 years ago, when landscape designers began to offer bold solutions.

Forchun has several subspecies that do not bloom at all. They multiply vegetatively, that is, through the roots or by cuttings. It should be noted that Forchuna actually has a lot of subspecies. Here are a few of them that are very popular today:

On our site you can find contacts of construction companies , which provide a loan for construction and related services, including landscaping: landscaping, planting, ponds, slides, mountaineering, rockeries, etc. You can directly communicate with representatives by visiting the Low-Rise House exhibition.

And we list a few more popular subspecies. This is Wilson's euonymus, American type, "Maak", sacred, Sakhalin and others.

How the euonymus is bred

In nature, birds do this, who eat the seeds. The latter are poisonous to humans, but in the winter for birds it is a great food. In the decoration of gardens and parks using root transplant or cuttings. There is another option, when a sprig is instilled into the ground, without separating from the main bush. When it gives roots, and this happens quickly, it is cut off, dug and planted in the right place.

It is necessary to add that in landscape design mainly use dwarf varieties, creeping and shrubs.If someone wants to plant a tree in a country plot, it is better to choose the variety "Maak".

This may be interesting! In the article on the following link, read about the main features of the Scandinavian style in landscape design.

If it is required to plant a hedge from an euonymus, then it is optimally either the Sakhalin view or the sacred one. They belong to the group of ground-covering plants. They have strong branches, so it will be difficult to spoil the cover.

If someone wants unusualness in the landscape design of a country plot, then Japanese eosklet are planted in small bonsai pots. The difficulty lies in the fact that a few years dwarf will have to be transplanted into pots or large containers until it reaches its maximum growth.

These types tolerate temperature fluctuations perfectly, but experts do not recommend leaving them outside in winter. Temperature + 5C - optimal for this tree. But it should be noted that it still throws the leaves in the winter in independence where it is stored. We add that the Japanese Euonymus does not like wet soil, which is why its leaves immediately become covered with mold. He does not tolerate heat, and in the shadows the crown immediately turns pale. By the way, the Japanese can be grown as a houseplant.

And the last thing - that does not like any species of euonymus:

In the video, they tell all about eosklete: landing, care, reproduction, pruning and other:

This may be interesting! In the article on the following link read about what features need to be taken into account when developing the landscape design of the forest area.

Ornamental plants, which today are used in the design of landscape designs of suburban areas, a huge amount. Euonymus stands out among them the unusual form of leaves and branches, plus a huge variety of color design. Poet u pick something necessary and original is not a problem. Plus - unpretentiousness of a plant, both to weather conditions, and to conditions of service and operation. 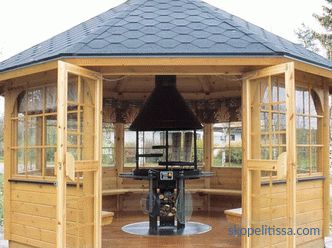 Arbor is an indispensable attribute of almost any country house. In a pleasant atmosphere and in the fresh air, you can spend evenings with friends and family, work, eat, relax. Recently, a barbecue... 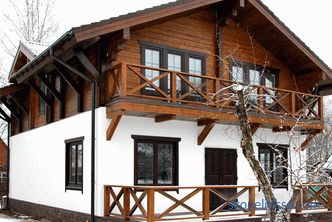 The abundance of high-tech building materials and various design solutions make it possible to create combined houses made of stone and wood, the projects of which combine the ecological compatibili...

Construction of turnkey houses in Moscow - projects and prices, cheap cottages and houses 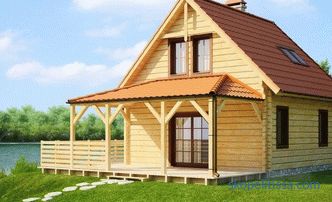 The development of the construction market is the emergence of a wide range of new and development of technologies that allow combining old building materials. As a result, modern residential buildi... 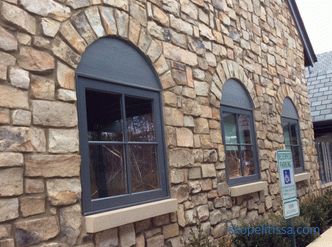 Today in the article we will talk about decorative stone for exterior decoration of the house. About his classification, about how the stones differ from each other, what is their structure and oper... 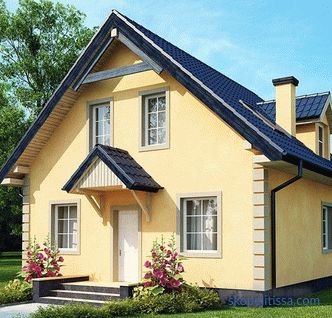 Today, many dream of suburban real estate - someone wants a big cottage for permanent residence, and someone needs a small country house. However, people are often afraid of problems that may aris...