Robert Konetsky built on the steep slope of the house-ark, which can only be reached by a drawbridge

This house, located in southern Poland, was designed by architect Robert Konecki for himself and his family. One of the main ideas of the project is that the house should have the widest possible overview of the surrounding landscape, which is distinguished by its rare beauty. For this, the architect used the panoramic windows, of which the "ark" facade completely consists.

Concern about the safety of the building, due to its remoteness and isolation from its neighbors, prompted the architect to integrate some unusual security measures into the project. In addition, the house must be completely closed when the owners leave for business.

The building departs from the slope, so the living quarters are raised to the height of the first floor. Rather close to the hillside, only the corner of the house where the entrance is located fits.

This corner includes a lifting bridge, which when lifting connects with a sliding panel, thereby completely closing all the approaches to the house.

Using a drawbridge and sliding panels for maximum security is not a new idea. This has already been realized in the "mini-fortress" of the architect Konetsky, built not far from Warsaw, which was called the "Safe House".

The principle of operation of the sliding panels of the walls of the ark and the "bridge" is quite simple, and is clearly seen in the following diagrams:

On our site you can familiarize yourself with the most popular house designs. from construction companies represented at the exhibition "Low-Rise Country".

The building is “set” on the ground in such a way that limits the potential for landslides. and at the same time allows streams of rainwater to flow freely down the slope, bypassing the house as a ship hull.

The lower part of the structure gives additional rigidity to the building. The house stands on an inverted roof.

"This construction of the walls increased their reliability," says architect Robert Konetsky. "In fact, we created a house with two roofs that protect it from water, and therefore the cottage began to resemble a floating ark over the fields."

The roof shape and roofing material complies with local rules design, according to which the buildings should preserve agricultural aesthetics, consistent with the historical canons.

Structural concrete is used for all facades - this reduces the overall construction budget. The roof is covered with a waterproof membrane that looks similar to concrete, which makes the overall style of the building homogeneous.

For maximum house insulation, all its internal surfaces are treated with insulating foam from a sprayer. Only in a few rooms were the surfaces specially left open in order to preserve the tactile properties of the walls and ceiling.

The location of the house on a large pasture allowed the architect to do without artificial gardening. This decision made the construction estimate a bit smaller, and the house itself made it possible to use farm animals, which could use the building to shelter from weather conditions, to monitor the grazing.

The lighting built into the base of the house illuminates it from below, only increasing the feeling that the building is "floating" above the ground.

A second lifting bridge, built into the lower part of the soffit, provides access to the basement where the lawn mower and other equipment are stored.

It might be interesting! In the article on the following link read about the chalet in the mountains.

Domokomplekt frame house from the factory: the advantages, types, choice

Frame technologies have recently been increasingly used for the construction of residential buildings. The domokomplekt frame house from the factory is a set of wall panels, floors based on dry trea... 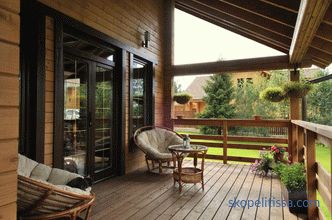 Houses from a bar with a terrace are economically very convenient and profitable. The project itself does not require significant capital and makes it possible to build an eco house with a well-equi... 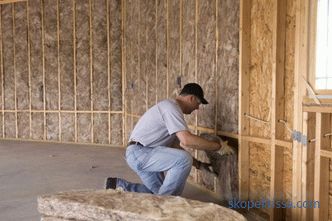 Experts quite ambiguously refer to the option of warming the house from the inside of the walls. Most often, this method is considered as an alternative, if for some reason there is no possibility t...

which is better to choose, species, installation

If you try to decide which septic tank is best for giving with non-permanent residence, then you will quickly understand that you cannot find a definite answer here. Family budget, "performance", ge...