How many kilowatts do you need? / h3.

The number of kilowatts required for a house each time is calculated based on how many electrical appliances are installed in a given dwelling. Yuri Rostovtsev , the manager of the village of Mushroom (Kaluzhskoye highway), calls the minimum volume for a country house 5 kW. "For example, a water heater consumes 2 kW per hour, a kettle - 1.5 kW, etc. If at some point many devices turn on simultaneously, it should be enough for a critical load," he explains.

It is worth saying that there are no legislative restrictions on the minimum and maximum, the borders can be determined by local authorities on the basis of the existing capacities in the region. At the same time, there is a set of rules containing recommendations for calculating the load for a house (SP 31-106-2002 "Design and construction of engineering systems for single-family residential buildings"). It says, in particular, that for a house less than 60 square meters. m without electric stoves design load should not be taken less than 5.5 kW, and for a house with electric stoves - 8.8 kW. But if the area of ​​construction exceeds 60 square meters. m, then the calculated load of electricity should be increased by 1% based on each additional square meter of home area.

Electricity consumption rates also depend on the type of building material from which the house is made, and the seasonality of living. So, to give an area of ​​150-200 square meters. m
you need 7-8 kW of electricity, and for a cottage of the same area - already 12 kW, which will enable permanent residence.

“The owner should do the preliminary calculation of the electricity required for the house himself,” Roman Konyakhin , the manager of the houses exhibition ”said, Low-rise Country .” - It should be indicated in the statement immediately, agree, and only then it will be possible to contact the project office for the drafting of the project. " In order to correctly determine the estimated capacity, the amount of energy consumption of the house must be distinguished between permanent and temporary. In the first case, take into account the power of the boiler heating, water pump, underfloor heating, refrigerator, air conditioner, TV, computer, lighting, etc. In the second - dishwasher and washing machine, kettle, microwave, sauna, hot tub. .. And the power is calculated, taking into account the consumption of the most energy-intensive device.

“The highest consumption comes from the electric heating system,” says Nikita Chulochnikov , a member of the board of the AKON association, “which is directly related to the area and volume of heated premises. The high energy consumption requires, for example, basin, because the energy required for the maintenance of pumps, ventilation systems and air conditioning is taken into account. " The expert calls 10 kW as standard conditions for connecting a household, which in some cases can be increased to 15 kW. Anything more than that requires obtaining new technical conditions.

Electricity consumption rates also depend on the type of building material from which the house is made, and the seasonality of living. "To give an area of ​​150-200 sq. M. You need 7-8 kW of electricity. For a cottage of the same area, it is already 12 kW, which will give you the opportunity to live permanently," says Georgy Nikolaev , the head of the developer’s service of cottage villages Andersen and Erie Island. In addition to a larger number of rooms, there is another important difference - there are usually two or more bathrooms in the cottages. According to the expert, in addition to the individual allocated capacity, it is necessary to take into account the total - on the village. For example, with a 100 kW transformer, theoretically, 2 kW can fall on each house, however, since the load is intermittent, the power is redistributed, and it is possible to use 8-9 kW.

It makes sense to connect to the power supply network at the construction stage. "During the execution of the work there is a need for electricity, and the use of diesel generators is quite expensive," explains Elena Zemtsova , managing partner of Delta Estate. Officially, the house is connected to the network after commissioning, so during construction the owners agree with the power supply for temporary connection. "It should be remembered that the penalty for unauthorized connection to electricity, if it is regarded as an administrative offense, will be from 1,500 to 2,000 rubles. According to Article 7. 19 of the Code of Administrative Offenses of the Russian Federation. Recently, for such a violation, the maximum measure - a fine of up to 80 thousand rubles, according to Article 165 of the Criminal Code of the Russian Federation - causing damage to property to the owner or other property owner by deception or abuse of trust in the absence of signs of theft ", - a warning et P. Konyahin .Power up to 15 kW is connected in a simplified manner without obtaining permission from the energy supervisory authorities and the act of commissioning.

"Gas, electricity, plumbing and sewage should be brought into the village first. If they are not, and construction has already begun, then this is a good reason to refuse to buy a house in this place. There are many examples in the country market when projects became settlements - ghosts due to the lack of communications (the construction of the cottages is already fully completed, but the developer has delayed se ries), and buyers were forced to look for more suitable accommodation cottage villages ".

In addition, services connecting to networks also have certain difficulties. According to Timur Glushko , Head of the Technological Connection Department of IDGC of Center, PJSC, applications for connection are usually submitted chaotically by owners of land plots and land plots, which ultimately complicates both construction and further operation and maintenance This kind of electrical network that looks like a web. In addition, all this is reflected in the timing of the connection, and the quality of electricity.

How much will the connection cost for the owner of the building? "According to a decree of the Moscow Region Government, today, connecting a house to the electrical network of no more than 15 kW will cost the owner 550 rubles, it will have to pay extra for more power. In the Moscow region, the cost of one additional kilowatt can reach up to 13 thousand rubles," E. Zemtsova .

In order to connect the house to the network, the owner of the household must contact the electricity supplier in the area, submitting a written application to which should be attached copies of the certificate of ownership, TIN, list of connected devices indicating their capacity, site plan . "According to this application, the owner of the house will receive the technical conditions on which he must order the project of connecting to the networks. And then the actual work on connecting the cottage to the electrical network is done," adds Ilya Menzhunov , director of the elite real estate company "Metrium Group".

Yuri Rostovtsev talks about the process itself: “We connect the object to our substation, which is located in the village. There is a pillar near each site and cottage, a self-supporting isolated wire. And from the pole to the cottage we make an underground connection so that there are no wires overhead. " The cost of this service is 15 thousand rubles. According to the expert, this option is considered more reliable (since in this case, communication is better protected, for example, from the effects of the wind) and also more aesthetic.

"The total cost of connection varies from 70 to 200 thousand rubles," says G. Nikolaev . This is the price of direct connection (and the cost of technical posts), shield and attachments, that is, wires. “At the same time, there are certain standards regulating, say, the distance through which columns must be installed. Consequently, this also affects the quantity of wire purchased. Directly connecting to the main line can cost about 30 thousand rubles,” the expert clarifies. Underground installation method is even more expensive, and, moreover, the final price always depends on the projected capacity.

The natural question arises: should homeowners follow the global trend in the use of alternative sources of electricity? At present, there are very few such examples - in the Moscow region complex, they are practically not used at all, they are installed only by owners of individual houses. "However, it should be noted that private owners living in their own homes, including cottage villages, are very keenly interested in such technologies," notes R. Konyahin . For example, in the seven months of 2015, about 1,400 families came to the exhibition " Low-Rise Country " purposefully - to select or purchase a solar water heater.

In order to connect the house to the grid, the owner of the household must contact the electricity supplier in the area by submitting a written application, to which should be attached copies of all documents.

The use of solar energy to heat water is considered a more suitable way to save energy than to generate electricity, due to the small number of sunny days in the Moscow region. Wind turbines do not pay off. "Usually various alternative sources pay off in ten years, but they still cannot fully replace the traditional power grid," says E. Zemtsova .

"Newly-sourced electricity sources are just beginning to be used, and then only in townhouses or low-rise apartment building projects. The most popular source is the energy of the earth's interior," continues P. Konyahin . - In this case, heat pumps are used, which use not the gas, not electricity, but the positive temperature of the earth.

"Russian developers, unlike Western developers, are in no hurry to introduce environmental technologies in the construction of their facilities. The reasons for this are the high cost and the almost complete lack of interest on the part of potential buyers," I. Menzhunov . In addition, the relatively low cost of our energy resources does not contribute to this. On top of that, Russia has no real state support - for example, there are no specific laws that would give developers using “green” standards in their projects, various preferences, such as real estate tax cuts.

Gable roof overhang: what to consider when choosing

When building a house, special attention is paid to how it is equipped and how the roof looks. One of its important parts is the gable overhang of the roof. If you make a mistake in choosing this ar...

Alternative heating for a country house

Prices for various types of heat carriers are growing more and more each year, so alternative heating for a private house is more relevant today than ever. The owners of country, private houses are... 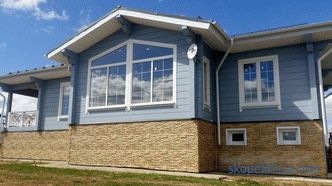 In the practice of country house-building, houses in the style of a chalet (also called Alpine or combined) are in steady demand. This interest is an echo of the boom that arose in Europe after the...