What is different from hanging ones?

Subject of the article - slats. The rafter roof system of the house is the basis of the roofing structure, its purpose is to form the roof, plus withstand the loads from the roofing material and snow, which will be laid in the winter in a thick layer. You can not discount and wind loads. It is necessary to indicate that the truss system can be assembled in different ways, where napsled or hanging rafters are used. Our task is to tell about the first ones, how they are assembled, how they are connected to each other and other elements of the roof truss system.

What are the hung rafter legs

So, the hung rafters are bars or thick boards that form the slopes of the roof. With the lower end they rest against the Mauerlat, the upper end with the ridge girder. A distinctive feature of the naslon rafter legs is their emphasis on the ridge of the roof of the house. In the construction with hanging rafter ridge beam is not used.

It should be noted that many roofing masters give their preference to the naked variety. The fact is that their use is a more durable roofing structure, because it contains two support systems: the power plate and the ridge. Secondly, it is easier to assemble such a rafter system. Usually they do it right on the roof, lifting all the required elements to it. At the same time, it is possible to adjust some element directly at the place of its installation, which ensures maximum accuracy of the assembly of the roof structure as a whole. Accordingly, the maximum quality of the final result is achieved. If the roofing structure is a large building with slopes of a large area, then bars with a minimum cross-section of 100x100 mm are installed as rafter legs.

It should be noted that in each particular case the truss system is calculated where the final result stands the cross section To do this, take into account the natural loads in force in the region where the house is being built, plus the weight of the roofing material used. The same calculation also determines the installation step of rafter legs. It should be noted that these two calculated indicators depend on each other. And this dependence is direct. That is, the larger the section of the rafters, the greater the step of their installation. And vice versa.

We add that the slope of the roof slopes is also used in the calculation. This parameter affects the cross section and the installation step of the rafter legs. The greater the angle of inclination of the slope, the less effect on it load. The smaller section of the boards can be used. With the installation step, it is necessary to carry out an additional calculation.

The types of rafters of the slanting type

As such, the classification does not exist . But it is necessary to understand that the roofing structure has certain dimensions, where the length of the rafter legs and the angle of the roof are based. It is clear that long rafters are subjected to heavy loads, even with their own weight, so they can bend, creating uneven skate planes. To prevent this from happening, support structures are installed under them. There are two types of them:

If the span is less than 6 m, then no supports under the roof frames are installed. Correctly calculated parameters of beams and planks, and this section and installation step, guarantee the reliability of the roof structure as a whole. In the bottom photo just such an option is shown.

In general, small roofs are simple. Because the compact design ensures its reliability in operation. And this is a kind of savings, because the smaller the size, the less additional elements can be used. In this regard, large-sized roofs are costly, because in order to ensure the reliability and stability of the truss system, it is necessary to strengthen them in pairs.

Pay attention to the photo below. It clearly shows that the rafters are interconnected by crossbars, which are called puffs.So these very tightenings ensure the stability of the rafters in pairs, not allowing them to disperse in different directions. And this can happen, because any loads acting in different directions add up to the same pressure in one direction - in the horizontal.

It should also be added that puffs can be installed in different places, that is, at different levels. There are usually three of them: at the bottom edge, in the middle, at the ridge. The photo shows the roof structure of the gable roof, the rafters of which are connected by two puffs: the middle and the top.

Rules for connecting and fastening rafters

Standard mounting of truss system elements - These are cuttings and nails. Today, the range has expanded, used simpler methods of fasteners, but no less reliable. Let's look at several options for attaching truss legs to the mauerlat and to the ridge bar.

On our website you can familiarize yourself with the most popular 3184 house projects from the best construction companies with an impeccable reputation in the market. A wide choice, reasonable price from 51050 rubles, flexible conditions and quality guarantee allow you to choose the right option for any budget and realize all the wishes of the client. Directly to communicate with representatives, you can visit the exhibition of houses "Low-rise Country".

Fastening the rafters to the mauerlat

The old way is to cut down, place the cut out place on the mauerlat and hold the fastener with two nails. The difficulty of this method lies in the fact that it is necessary to do cutting. This is a cut-out on the rafter leg, made so that the rafters fall on the mauerlat, tightly pressing the cut-out ends to the mauerlat, while maintaining the required angle of inclination of the roof slope. In the photo below, this option is shown.

To this method of attachment, wire was often added earlier that was passed through the bottom of the mauerlat by wrapping the rafter and twisting the wire over the top.

Today, with the arrival on the market of the latest building materials and fasteners, including methods of fastening have become much more efficient and easier. At present, metal fasteners, which themselves are attached to used parts from sawn timber with wood screws or bolts, are very popular among craftsmen. For example, the photo below shows one of these mounting methods.

In general, a bolted connection is one of the most reliable. At the same time, it allows for simplified dismantling if the task is to reconstruct the roofing structure or overhaul it. At the same time, the dismantled elements remain in a qualitatively reliable state.

I would like to show another option of attaching rafters to the power plate, which is most often used in the construction of roof structures built over wooden or frame houses. The fastener consists of two parts: one is attached to the power plate, the second to the rafter leg. Between themselves, they are joined by a mobile connection. So that you understand what is at stake, look at the bottom photo.

That is, the roof bars relative to the power plate can be mixed, but it is securely connected to it. The essence of the fasteners used is that the wooden and frame houses are subjected to strong shrinkage. To prevent mixing and breaking of all joined elements, and a movable type of fastener is used.

The video shows several ways of attaching rafter legs to the mauerlat:

On our website you can find contacts of construction companies that offer roof repair services , installation of windows and doors, home insulation. Directly to communicate with representatives, you can visit the exhibition of houses "Low-rise Country".

Fastening the rafters to the ridge bar

Now about fastening the rafters to the ridge bar, as well as to each other. As mentioned above, the distinctive feature of the nasal truss system from hanging is the presence of a ridge. There are several mounting options. We will show some of them and describe the advantages of each option.

The video shows the installation of the ridge and floor rafters:

The traditional way is cutting and nailing. He, as in the case of mounting rafters to the power plate, is difficult to perform. To do this, it is necessary to precisely cut down, which takes a certain time. But we must pay tribute to this method, it is reliable and time-tested.

This is a modern version of the mount, which uses perforated elements made of galvanized steel with a thickness of 3 mm.In this case, one of the fastening elements is used, and more specifically, a corner that is attached to the rafter leg and ridge girder with wood screws.

It might be interesting! In the article on the following link read about the technology of building a gable roof and its rafter system under the corrugated flooring.

This is a more reliable type of fastening, which uses two elements of different shape and size. One is a corner, a second perforated plate. It should be noted that the fasteners are installed on both sides of the rafter legs. Thereby achieves increased structural strength. For fasteners, you can use screws or bolts.

This type of fastening falls into the category "mobile", so it is mainly used in the construction of wooden or frame houses. It gives the opportunity in the process of shrinkage of the building does not break the roof structure. The connection is unique, it is not easy to describe it, so we suggest looking at the photo, where everything is very clearly visible.

It should be noted that the joining of rafter legs on the ridge bar can be done with overlap or end-to-end. All of the above options are a butt joint. It is believed that this method is more reliable. As for the connection overlap, it is shown in the photo below. In this case, the fastening can be done with screws or bolts. Under the last will have to drill through holes immediately in a pair of installed truss feet.

It may be interesting! In the article on the following link, read about thoughts on the crisis of the market for country housing construction-an analysis of past years and the near future.

We will not delve deeply into the roof assembly technology, just let us give the sequence of the assembly process and install the video below.

Now we suggest watching the video material, which shows how to install the truss system of napsled rafters:

It may be interesting! In the article on the following link read about the modern extension to the house-architectural monument from the studio Building Culture.

In conclusion, one thing can be said - the railing system is traditional. And it has increased strength and carrying capacity. But to all this, it will only respond if it is correct to carry out the calculation of parts and assemblies and correctly carry out the installation.

what depends on the thickness of insulation 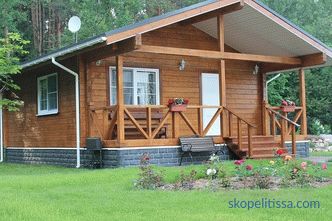 A bath has existed in different cultures since time immemorial. Always and everywhere it was considered a place of not only rest and purification, but also healing. In Russian culture, the baths are... 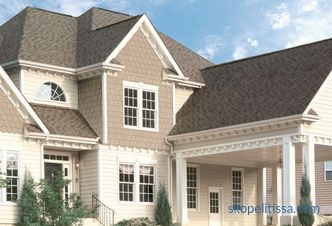 For decades, siding has been popular with decorative materials. It performs several functions at once, protects the house from the influence of the external environment, decorates it, making it mo...

types and subspecies, methods of reproduction and care 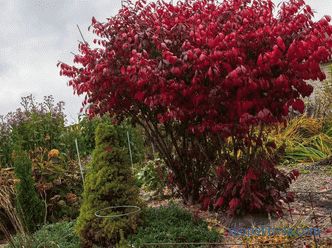 The subject of the article is the euonymus in landscape design. We will talk about what this ornamental plant is, what types and types it is, how to plant it and care for it properly. And let's star...