The minimum slope of the roof of the sheet

At the design stage of any building, be it a private house or an industrial structure, the correct angle of inclination of the slopes of the roof from a profiled sheet (corrugated flooring) will maximize the wind resistance, achieve fast removal of snow and water, and also find a compromise between the amount of materials consumed and the durability of corrugated board. In this article, you will learn what the minimum slope of the roof can be set from the profiled sheet, especially when installing the roof at different angles and calculating the permissible angle of the planned roof.

The reason for the need for a minimum slope

Any non-flexible roof has a minimum angle to horizontal surfaces from 10 °. On the example of profiled sheeting, this is understandable in view of the possibility of rain water entering between the joints of the roof, stagnation of a large amount of snow on the roof surface. There are no strict limits on the maximum angle, however, roofs with steep slopes, where the angle of inclination is more than 60 °, are less wind-resistant.

The concepts of angle and slope, minimum angle according to SNiP II-26-76 *

The angle, measured in degrees, shows the deviation of the slope from the horizontal surface, and the slope, measured in percent, is the ratio of two legs of a right-angled triangle, vertical to horizontal, formed by one slope and base.

Based on the construction norms and rules of the Russian Federation for roofing SNiP II-26-76, the minimum angle of inclination of the corrugated roof installed on the roof of residential buildings is at least 10 °, or at least a slope of 17.6%.

The minimum slope of the shed roof of the corrugated roofing sheet is 8 °, this value is also applicable to buildings of industrial and economic orientation.

When designing the roof and calculating the necessary materials, it is important to understand that the smaller the angle of inclination of the slope, the greater the overrun of materials. When the slope of the roof of corrugated not more than 12 °, you must leave at least 20 cm of the profile under the vertical and horizontal overlap. It is necessary to use a sealant to seal the joints between the sheets of corrugated, with both horizontal sheets and vertical. With an increase in angle of more than 12 °, no sealant is required, and the distance required for an overlap decreases.

The maximum distance between the battens with an increase in the angle increases. Since rainwater and, especially, snow does not linger on roofs with steep slopes (with an angle of more than 30 degrees), the installation of a solid batten is not required.

The table below shows the dependence of the thickness of the profile pattern, the angle of inclination and the pitch of the batten.

Profile picture thickness * - this size is indicated in the name of the professional sheet, for example , C-8, MP-20, NS-35, etc.

To calculate the allowable slope, you need to know the following components .

To calculate the allowable slope of the sheeting to the horizontal, it is necessary to know its bearing capacity. Examples of bearing capacity for several grades of corrugated under the second bearing scheme are shown below:

More detailed information about the maximum load of corrugated flooring of different brands can be found in the description of the characteristics of this roofing material.

The weight of the roofing cake is taken on the basis of the technical characteristics of the components, for example:

Totally, we get the weight of the roofing pie equal to 58 kg per 1 m².

Details that will help solve the problem of sealing roof joints

On our website you can find contacts of construction companies that offer services for roof design and repair . Directly to communicate with representatives, you can visit the exhibition of houses "Low-rise Country".

Wind and snow represent the greatest danger for roof covering by professional sheets. Frequent cases of failure of entire roof slopes in the event of a strong gust of wind. The accumulation of snow can deform the decking, weakening it to the onset of the summer season. The avalanche fall of snow can cause damage to the car, or injury to the occupant under the eaves.

When designing a roof, it is important to know the general characteristics of the local climate, the wind rose and wind pressure, the amount of precipitation in winter, and the snow load in detail.

Paying attention to the map of RF wind pressure zones you can see that the largest wind pressure is created mainly in the coastal zones, off the coast of the Black, Caspian, and Barents Seas. Whereas in the continental part of Russia, with the exception of high mountains, the wind pressure reaches no more than 42 kg / m².

In order to calculate the wind load acting directly on the roof, it is necessary, in addition to knowing the calculated wind pressure, to have a factor that takes into account aerodynamics, which is often taken as the maximum 0.8 and the altitude coefficient, depending on the height of the building and the openness of the territory.

It might be interesting! V article on the following link, read about how the roof is made of corrugated .

The map of snow load in Russia shows the weight of snow cover on a horizontal plane. The greatest amount of snow cover occurs in mountainous areas and the central part of Russia.

It is guaranteed that the minimum angle of inclination of the roof can not be calculated for snow melting, however, the slope is 30 ° and more will allow the roof to remain clean even with moderate precipitations.

Taking the Tver region for the calculation, the amount of snow cover will be 240 kg / m². This value should be multiplied by the correction coefficient µ, taking into account the estimated inclination of the roof.

Having determined the roof installation angle of 30 °, the pressure of the snow cover will be 205 kg / m².

The final part of the calculation of the slope angle of the roof made of corrugated sheet is a comparison of the maximum load of the metal sheet of the professional flooring H60-845-0.8 to the total load created by the wind and snow loads.

This calculation allows for all selected conditions, the ability to install sheeting at an angle of 30 degrees.

Generally, for most territories of the Russian Federation, the construction of roofs with slopes from 25 to 40 degrees can be the most rational. Slopes of roofs located in areas of strong winds should not be constructed with angles greater than 25 degrees. The optimum range starts from 15 to 25 degrees. Installing slopes with a minimum slope of the roof of corrugated roofing in areas of strong winds can create lift and tear off the metal flooring.

In the video, you can see the roof of the profiled sheet with a slope:

It might be interesting! In the article on the following link read about the project of a house with a wavy roof .

Building the roof of your own house is an expensive part of construction, however, understanding the basic requirements and characteristics related to the slope of the roof slopes covered with corrugated roofing will help you accurately assess the rationality of the services offered, will give confidence in the choice and possibly save some money while maintaining quality.

Lighting of facades of private houses, types and possibilities of realization 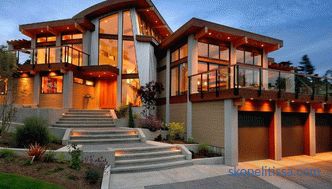 The light design of the facade at night adorns the structure, gives it a cozy and welcoming look. The article describes the principles of creation and functions of lighting facades of private houses...

The article provides information about the methods and technology of laying paving slabs, which is the best method to lay it and which one is best suited for your summer cottage. Also it is told abo...

Binding of the frame house lower and upper, stages of installation, schemes, photo 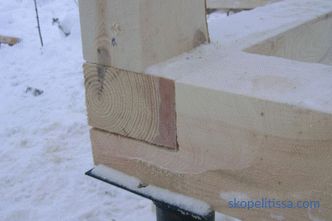 The reliability and durability of a frame building depends largely on the lower and upper trim. They must be carried out in full compliance with the technology, otherwise the house will not last for...

original and practical ways of finishing 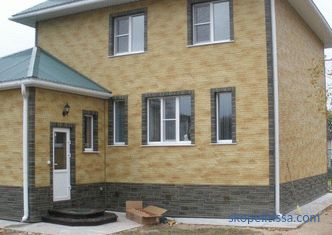 According to architectural canons, the basement is a part of a building lying on the foundation, and is considered as a transitional wall between the foundation base and the exterior walls of the ho...