The blind area around the house with their own hands: how to do, instruction

The blind area around the house is a wide “ribbon” with a hard or bulk coating. But this is only the visible part of a rather complex construction. Many perceive the blind area of ​​the house as a type of walkway along the wall, and although such use may be included in the list of functions, the main purpose of the design lies elsewhere.

Why is blind area

Among the regulatory documents there is no separate standard SNiP or code of practice on how to make a blind area around the house correctly. There are several documents defining its purpose, requirements for the width and angle of the slope, interaction with other elements of the atmospheric water drainage from the site on which the building stands.

According to the regulations, there must be a waterproof blind area around the building, which is created as part of the mandatory water protection measures directed against local soaking of soil in the area of ​​the base of the house.

That is, it is about protecting the soil, not the foundation. To protect the materials of the base itself, the foundation is waterproofed, because in addition to atmospheric water, there is also groundwater, which rises high during the rainy season and during the melting of snow (the so-called super-water line).

And the ground must be protected from getting wet, because under the action of moisture, many types of soil (clay, loam) lose some of their bearing properties and may simply not be able to withstand the design load from the building. To prevent soil erosion and arrange the blind area, which, however, in parallel protects the foundation, removing part of the load from the waterproofing layer, which protects the concrete base of the house from getting wet.

In addition, the blind area around the house is an element of the architectural appearance of the building and part of the landscape of the site. There are many ready-made design solutions to mask the blind area, and when using hard surface to use it as a walkway.

This can be interesting! In article on the following link read about the width of the blind area around the house.

Requirement for the blind area

There is no requirement in any regulatory document that relates the blind area to the overhang of the roof. Moreover, there are no requirements to exceed the width of the blind area by 20-30 cm relative to the projection of the eaves. Building a blind area around the house from concrete with your own hands, it is not necessary to be guided by these figures.

The regulations only provide for two minimum widths. And they depend on the soil:

This is exactly what is indicated in the manual on the construction operation control schemes for supervision services.

With an unorganized drain, side overhangs of roofs of houses up to two floors should be less than 60 cm. If the house is on sandy ground, the difference between the width of the blind area and the size of the overhang of the roof may be 10 cm, and not contradict the requirements of the standards.

That is, it turns out that the parameter 20-30 cm is just a statement of the real ratio of two sizes for most cases. But not for everyone.

Clearly about the requirements for the blind area of ​​the house on the video:

If the soil is subsiding, depending on their type, the standards impose other requirements on the width:

And in any case, the blind area must be 40 cm wider than the pit of the pit.

The elevation of the outer edge of the blind area over the site should be more than 5 cm.

Before you can properly build a blind area around the house with your hands or order its construction, you need to decide a species. There are three options for the top coating device:

Hard coating. It is a monolithic strip of concrete or asphalt concrete. In the first case, creating a blind area with their own hands, a mandatory reinforcement is carried out, in the second case it is not required, due to the resistance of asphalt concrete to bending loads.

Arrangement of the foundation and pouring of the blind area around the house is carried out using the same technology as for the tracks, but taking into account the fulfillment of the mandatory requirement for a slope from the base.

Protection against water occurs due to the water resistance of both types of concrete. Therefore, it is important that the surface does not have cracks and tears of the coating. The second feature is that a gap is needed between the blind area and the plinth, which compensates for the temperature expansion of the monolithic coating.

Semi-rigid coating. Made from paving slabs, clinker bricks or paving stones.The device and method of laying is carried out by analogy with sidewalks and platforms made of these materials with the obligatory creation of a waterproofing layer as part of a blind area:

Soft coating. The classic variant is the arrangement of the upper layer of a compacted layer of dense (waterproof) clay. Many people know how to make a blind area of ​​this type: they used to make it around village houses before, and now this solution is periodically used as an "economy option" around small country houses, but with a top layer of decorative (colored) gravel. To improve the waterproofing between the clay and gravel, you can lay waterproof film. It should be understood that the blind area is not just a decor, you should not save much on it.

Now a new type of soft blind area around the house is gaining popularity based on a profiled membrane. The general order of work here is as follows:

The bottom of the trench is rammed with a slope from the foundation.

A layer of filtering geotextile is rolled over the membrane and penetrates the wall of the base of the house.

Then a drainage layer of rubble and sand is poured, and on top of it is fertile soil, which is sown with lawn grass or ornamental plants are planted.

This blind area is also called hidden. This is a beautiful solution, but with a significant drawback - it is not recommended to walk on soft surfaces. However, you can always additionally organize the path.

It might be interesting! In the article on the following link read about purpose and types of blind area construction around the house.

Errors can be at any stage. Therefore, it is very important to know how to properly fill the blind area around the house. But even owning the technology, you need to be careful.

For example, an insufficiently rammed backfill of the soil leads to an “unplanned” shrinkage and destruction of the integrity of the waterproofing layer or the hard surface. The same consequences occur if due to the carelessness of the workers backfilling construction debris.

At the stage of sealing the bottom of the trough, it is necessary to observe the level of the bottom of the pit and its slope . This is one of the important conditions of how to make a blind area around the house. Unevenness of the bottom leads to an uneven thickness of the rubble layer, the difference in its bearing properties in different areas, which may be the cause of cracks in the concrete. And if the profile of the trench is improperly sloped during the rainy season or when the snow melts, the overburden will literally flow down to the foundation from moisture-saturated soil.

It is unacceptable in the preparation of a concrete mortar using sand containing clay and dirty water. This will worsen the quality of the concrete and reduce the life of the blind area.

If a crane for irrigation is provided in the basement of a private house, then a separate drain should be laid under it. It is needed to divert water beyond the blind area in case of leakage of valves or leaking hose connection.

Another error when installing the blind area on the video:

The maximum angle of blind area is 10%. And with organized water drainage from the roof, trays should be laid under the drainpipes with a slope of more than 15%. This requirement is sometimes ignored.

Determination of the blind area thickness

Concrete, semi-rigid or soft coating are used on the section of a private house. The thickness of the semi-hard coating is set by the material itself for the pavement around the house: clinker brick, tile or paving stone. But the size of the concrete pavement must be calculated. At least in order to calculate the volume of the solution and the depth of the trench for all layers.

Knowing the normative width of the blind area and the minimum level of elevation of the outer edge over the plot, one can calculate the only parameter that is not regulated by the standards - the thickness of the hard coating, taking into account its slope.

New samples of facade panels at the exhibition "Low-Rise Country" 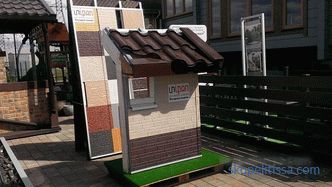 Visitors to the "Low-Rise Country" can now see product samples of the new exhibitor - Unipan plant. This plant is engaged in the release of siding panels for building finishes. Today...

Hall design - how to make the living room beautiful and cozy 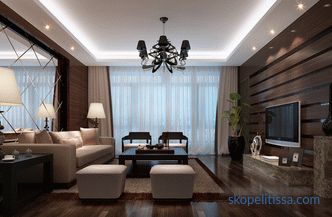 The article will talk about how the design of the hall is created, how the style and thematic concept are selected, what advantages and disadvantages classical directions and new trends have, reflec... 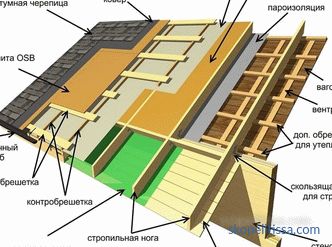 At the planning stage of construction it is important to choose the right roof for the future home. The roof in the frame house is built on the same principle and from the same materials as the roof...

price per m2 - which one to buy metal siding in Moscow 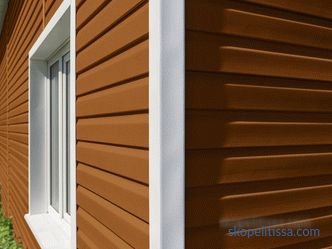 The article contains information about metal siding for exterior home decoration about its advantages and disadvantages, installation features and price offers for this material in Moscow and the re... 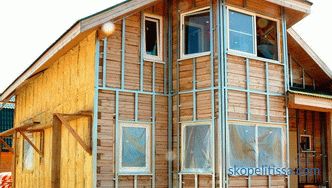 Houses from a bar, thanks to the environmental friendliness, are popular option of private construction. But although they are fairly quickly heated and have good thermal insulation properties, warm...