Lightweight buildings require the same light foundation. Garden houses, small cottages, summer kitchens, gazebos and verandas - all of them can be put on the foundation of asbestos-cement pipes. But despite the name, the asbestos-cement pipe is not a supporting element - its role is much more modest. And although it has a certain margin of structural strength, it is only permanent formwork.

Features of the foundation of asbestos-cement pipes

If in a “heavy” brick house the project does not need a basement, then it is put on a shallow strip foundation. It is proved that the total weight of the load on the base compensates for the forces of frost heaving, which tend to "push" the foundation. Small light buildings do not have such a balance of forces, and when the base of the tape is above the line of soil freezing, various types of deformation are possible. In-depth ribbon foundations are unjustified expenses and excessive bearing properties that are simply not needed.

A shallow-collapsible precast columnar foundation (made of brick or building blocks) on abyssal soils does not work for the same reasons as shallow-tape. And the easiest way is to set up a monolithic column foundation of asbestos pipes with a deepening below the freezing level. When compared with other methods and materials, this option is better for several reasons:

And the main advantage is the speed of work.

How the asbestos-cement pipe support is arranged

Asbestos-cement pipes were originally designed for completely different purposes. They are used in drainage systems, in the external part of the sewage system (including storm water), as a protective sheath of underground cable networks. This "people's" ingenuity has found another use for these pipes - they began to make pillars for the foundation of them.

On our website you can find contacts of construction companies that offer the service of designing and repairing the foundation. Directly to communicate with representatives, you can visit the exhibition of houses "Low-rise Country".

The manufacturing technology of the base column is simple:

Note. There are small deviations from standard technology. For example, during the pouring of a pipe with concrete, it is lifted upward so that the solution spreads along the bottom of the pit and forms the heel of the support. Such simple reception allows to increase the bearing properties of a column.

Calculation of the column foundation

The principles for calculating this type of foundation follow the general rules.

First, the cumulative load is determined. These include:

According to the results of calculations and on the basis of the characteristics of the soil, the total area of ​​the supports is determined.And then either for a given number of supports determine the minimum cross-sectional area of ​​one pipe. Or vice versa - according to the chosen type and size of the pipe, the number of supports and the distances between them are calculated.

The calculation process itself is rather complicated and can be carried out in several stages using the “successive approximation” method. A professional should be involved in designing - the principle of approximation according to the type of such recommendations is fundamentally wrong for the foundation: “usually pipes with a diameter of at least 100 mm with a distance of 1.5-2.5 meters between them are usually chosen”.

The cutting of asbestos-cement pipes is demonstrated in this video:

It might be interesting! In the article on the following link read about column foundation.

Recommendations for use and arrangement

There are certain conditions when the use of asbestos pipe foundations is not recommended even for low-rise construction. The first of these has already been described - these are houses with brick walls, buildings of solid concrete or full-bodied building blocks with a density of D1000 and higher.

Horizontally movable soils are prone to “tilting” and poorly hold a columnar foundation. As well as peat bogs, water-rich sand and clay soils.

The high level of groundwater and the rise of seasonal water pipelines require waterproofing the treatment of asbestos-cement pipes before they are installed. Whatever the dense structure of the concrete pipe, with prolonged exposure to water during the autumn rainy season it becomes wet. There is no place for moisture to disappear under the ground, therefore with the onset of cold weather the water in the soil and in the concrete freezes as a whole, increasing the effect of ground heaving. Therefore, waterproofing is doubly important: both to protect concrete and reinforcement from corrosion, and to reduce the forces pushing the foundation.

Waterproofing of pillars is carried out in two ways: by coating with bitumen mastic or by wrapping two or three layers of moisture-proof roll sheets materials. Sometimes both methods are combined.

In addition, to protect soils from getting wet and preserve their bearing properties, a blind area device is necessary.

It is possible to improve the load-bearing properties of a pile foundation made of asbestos pipes of short length due to the broadening. In the foundation of TISE (this is one of the variants of the pile-gravel foundation), the expansion in the base is obtained by using a special knife. As the experts reasonably argue, there is nothing new in the technology itself, except for the brand drill. Such an extension (albeit of a smaller diameter) can be made by installing a pole from an asbestos-cement pipe. To do this, you first need to drill a hole with a diameter equal to the size of the broadening, and fall asleep on a compacted bottom sand pillow. And to make the broadening possible in two ways:

Important! When laying the reinforcement cage, make sure that the reinforcement does not pierce the concrete through. As in any reinforced concrete structure, ferrous metal fittings must be protected from contact with water and air by a layer of concrete. The recommended thickness is at least 2 cm.

Only a specialist should determine the need and possibility of widening. Already at a freezing depth of about two meters, the tangential heaving forces on the lateral surface can “tear” a pillar with a massive broadening.

Although waterproofing a pole reduces grip when the water freezes, there are other ways to reduce the effects of heaving forces:

Each concrete pipe should be poured in parts, but without long breaks and within one working day. Each portion of the solution must be sealed with a bayonet. The time required for concrete to build up strength is at least four weeks, and this must be taken into account when calculating construction time.

one season. Each pillar, not connected to another by means of a grillage and without the main load from the structure itself (walls, floors, roofs), behaves like a separate foundation. As a result, after wintering, it may happen that, due to uneven precipitation, their heads will be at different levels. And this will greatly complicate the installation of the grillage and the construction of walls.

In more detail about the installation of the foundation - in this video:

It might be interesting! In the article the following link read about the depth of the foundation.

Construction of the column base, despite the simple algorithm and availability of materials, is no less complex than building any other type of foundation. In each case, there are many factors that only a professional can take into account.

For lovers who spend all their free time at a car, the inner lining of the garage takes on particular importance. The article offers an overview of popular materials that are suitable for finishing...

planning, projects with attic one and two-storey houses 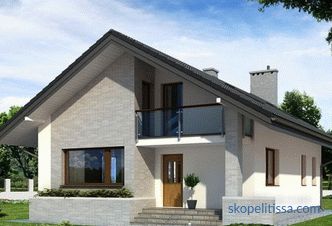 A country house made according to a competent project will be the best option for true connoisseurs of comfort and practicality. Despite the relatively small area, the layout of the house 6x8 will p... 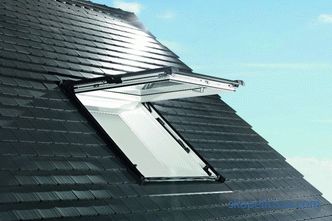 In this article, you will be covered with such an important topic as the price of a roof window on the roof window. Below is all the information about the cost of such devices in online stores, on t...

Exterior finish of the house from a bar, design of a facade outside, materials, technology, photo

Many owners of new wooden houses from a bar think about whether to use decorative walls, accompanied by additional costs, or you can do without it. In order to resolve this issue, you need to know w... 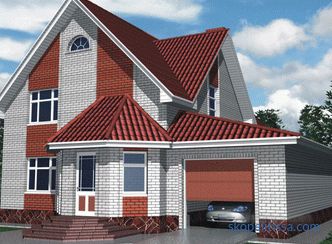 The subject of the article is a triangular roof. Mainly used roof structures in three slopes to cover the extensions: terraces, verandas, winter gardens and other structures. Because with one pedime...