Our experts point out several trends in the construction of country houses. Firstly, the technology of rapid erection of individual houses is gaining popularity, where factory production plays a fairly significant role - the main elements of the future house are being prepared on the conveyor, and it is quickly assembled on the construction site. Additional benefits - a spectacular appearance, durability, no unnecessary trouble in operation.

As Natalya Alekhina , project manager of the Flemania KP company at Good Wood Development, told the Real Estate Portal MetrInfo Ru, the company recently introduced a new technology - panel-beam housing construction. "This is a joint technology of Goodwood LLC and Rothenstein Rus LLC for building houses from panels in 10 days. The panels themselves are assembled in production and are already delivered to the site ready for installation. Thanks to the production of panels in production, we ensure the high quality of their manufacture "because they are undergoing thorough technical control. Using technologically advanced materials, we can produce panels that, in a number of properties, are not only inferior to brick and wood, but also surpass them."

Roman Konyakhin , managing the exhibition of houses " Low-Rise Country ", where 13 modern house-building technologies are presented, notes a steady interest in them from the visitors. Some of the new products are just entering the Russian market. “So, at the exhibition you can find fiber cement facade panels of the Japanese manufacturer KMEW from the official distributor of KM-technology, which are not only more durable, but also self-cleaning. The color of the panels practically does not fade in the sun and is non-combustible. Fiber cement facade panels allow you to embody virtually any of the most ambitious ideas of the designer. This technology is used in the decoration of one of the exhibiting houses of the exhibition, built using frame technology. Peresvet "".

The exhibition also demonstrates well-known construction methods to the consumers: from glued laminated timber, such houses do not shrink and do not require interior decoration (and so beautiful!), And the panel-frame principle of building houses when all the blanks are sawn , adjusted to the size and impregnated with the appropriate compositions directly at the factory.

But of course, the owner of a pre-fabricated house would like to add personality to his “typical” dwelling, which is quite possible. According to Irina Derevenskikh , marketing director of the SAPSAN group of companies, in the English Channel village (Novorizhskoye highway, 57 km from Moscow Ring Road), there are about three dozen house projects that are built using four technologies ( Canadian, aerated concrete, half-timbered, glued laminated timber). And each architectural project can be finalized in accordance with the wishes of the client. An additional "trick" for each buyer of a house in the villages of SAPSAN GC is a service offer from its own D45 Design Laboratory, which specialists will offer an individual project not only for the interior, but also for the original and ergonomic landscape of the site.

In individual construction, more and more solutions appear to save energy, heat, absorb sound. In the development of modern building technologies, these principles are already being laid, and in addition new interesting materials appear. True, while they have not received widespread use and cost a lot of money, but who knows how life will turn, maybe in a few years they will become quite ordinary.

So far, the acoustic brick can be attributed to the wonders of the country market. “Externally, it looks like an ordinary brick, but there are gaps inside it, special cameras that delay the sound inside,” explains Irina Ignatieva, marketing director at ComStreen. “From the slit bricks, interior partitions are laid out as sound insulation. Today this technology is not very common in the power of complex and expensive styling technology. "

Alternative sources of energy are being introduced slowly and fashionably from environmentalists. We are talking about solar batteries, wind turbines. According to Elena Zemtsova , the managing partner of Delta estate, in the Moscow region such types of energy saving have not been used in a comprehensive manner, however, there is a rather high interest of private homeowners. “Of course, it’s impossible to fully switch to alternative sources of energy in our climatic conditions, but the very idea of ​​clean energy will attract many customers,” concludes Elena Zemtsova .

We now turn to layouts. They, as most of our commentators assert, become more functional, literally every centimeter serves to the benefit of their owners."Nowadays," optimizing "is less and less likely to meet the layouts of houses whose space is being wasted, for example, a staircase to the second floor in a half-house or protrusions of the facade, which create the beauty of the house outside, and are not involved inside", - comments (" Low-rise country "). The "unattended" space in houses and townhouses disappears, it is occupied by built-in wardrobes, dressing rooms, workshops, etc.

The areas of houses and land plots are inexorably reduced, and in all segments, including the elite. Just a few years ago, one of the main obligatory characteristics of the high-budget segment was a huge area and a plot of land per hectare, ”recalls Ilya Menzhunov , director of the elite real estate department of the Metrium Group company. Today, potential buyers have a more European approach. Increasingly, priority is given to optimal areas of households and relatively small plots. The number of buyers interested in palaces with a huge attic and a basement with an area of ​​half a house has decreased. Today, even in the luxury real estate segment, buyers prefer a practical approach. When inspecting a home, customers always represent how expedient it is to pay for large areas, which may become an empty unused space in the future interior.

And as it adds Alsou Khamidullina , the director of the suburban department of Contact Real Estaté, buyers are increasingly refusing socles, mansards, extra levels and areas also because they don’t want to keep these meters and pay big taxes.

Reducing the size of suburban housing, the desire for practicality in the layouts is reflected in the architecture - these are interrelated processes. The style of "expensive, rich", "so as in the Hermitage" remains in the past.

"All crisis trends are due to savings, now developers are working with cost. World architecture and construction trends are directed towards minimalism and cheapening," notes Vladimir Yakhontov , managing partner of MIEL-Suburban Real Estate ". Moreover, as the expert emphasizes, simplification is typical not only for Europe, but also, for example, for Turkey, despite its oriental flavor.

Well, in native Palestinians, developers who are attentive to the “appearance” of their product will be given an assessment in the professional community. For example, houses in cottage settlements along Novorizhskoye Highway "RADOST" (52 km from Moscow Ring Road) and "Grove" (23 km) from M9Development look very attractive - nice looking colors, large windows, interesting compositions of geometric figures (constructivistic motifs are guessed) The method of asymmetry was used in moderation and taste ... The RADOST project was recognized as "Cottage settlement No. 1" in 2015 (Award "Records of the real estate market"), and also - "The best creative innovative concept of a low-rise construction project of a business class in 2013" (NAMIX Award). "And we are building without building innovations, in the old manner, of brick and monolith," notes Anton Minedjan , Project Manager RADOST and Grove. At the same time, the company skillfully combines modern approaches and "eternal values": a village in a coniferous forest with real brick houses inspires customer confidence, the expert emphasizes.

Buyers appreciate originality, dissimilarity, "non-common facial expression." Developers often use styles that have long been established in the world architecture, for example, we have many villages in the Scandinavian or Mediterranean style. Irish traditions in our market are rare, which is what attracts them. Vladimir Yakhontov , managing partner of MIEL-Country Real Estate, identifies the Erin Island settlement on the 26th km of Kaluga highway (Erin is the ancient name of Ireland): "If the first stage of the project (multi-format construction) an example of an individual style without “show off”, romanticism of medieval simplicity of forms and colors, the basis of the new line is an unusual architectural concept - “horseshoes” that form the silhouette of a large clock mechanism from the air. Part of the facades will have a bright color scheme using yellow , blue, lilac, orange. This is, in particular, a reflection of the Irish tradition - to paint the doors of the house in bright colors to create a positive atmosphere against the background of neutral facades. "

The same ideology is more modest, but nobler; simpler but more functional; less frills, more benefits plus originality - lies in the concepts of the villages of the new generation.

According to Vladimir Yakhontov , the authors of the Erin Island project managed to create a friendly human habitat: the inside of the house with green areas reminiscent of the famous Moscow courtyards, a pedestrian boulevard stretches along the diagonal of the building.To get to the bank of the Pakhra River (which encircles the residential building), residents of the houses will spend no more than 5 minutes. The river zone has already been improved, the embankment has been built, barbecue areas and fishing places have been organized. Planned organization of the boat station.

To achieve comfort for residents, it is not necessary to spend a lot of money. "Now there are solutions that do not significantly affect the cost of construction, but at the same time can become an additional competitive advantage," says Irina Ignatieva , marketing director of ComStreen. - For example, lighting of facades, tracks, installation of street trainers , limited access to the territory using a barrier, the use of technical premises for storerooms. "

The expert cites the example of a low-rise complex "Mitino-Dalnee" (Pyatnitskoe Highway, 17 km), where such a solution was used as individualization of entrances, houses, streets using color navigation. "The facades are distinguished by the colors of window frames. The roofs of houses in the residential complex are also of different colors. And this greatly distinguishes the village from others, especially when you fly over it by plane," concludes Irina Ignatieva .

where and how to do it

The article will talk about where you can buy ivy for a hedge, what types of vines exist, how to plant and grow a green fence, how to care for it. Diseases and pests are described in detail, photos...

Construction of the house on turnkey Canadian technology, projects, price 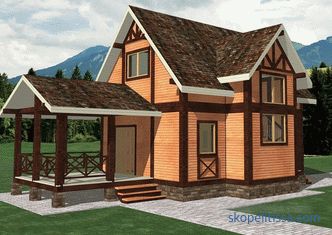 Thanks to the speed of construction, country houses using Canadian technology are widely in demand in the suburban real estate market, especially since it is enough to simply order them on a turnkey...

The first mentions of baths are found in historical documents about ancient Greece. Of course, the appearance of the ancient Greek bath was completely different from the modern version, but it was b...

Warming of the house of aerated concrete outside, what and how to warm, materials, plaster facade, price 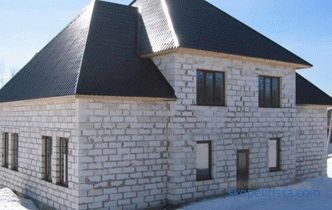 Aerated concrete (gas silicate) is one of the most sought-after materials in modern housing construction. Houses made of aerated concrete have become a familiar part of the suburban landscape; from...

House of cabins - how to organize, examples and photos 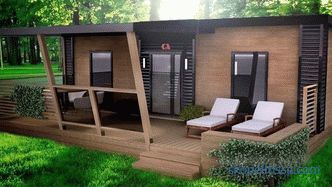 Many people have summer cottages outside the city, but not all of them are equipped for living. Some use the land as a vegetable garden, while others only plan to build a house on it. But to come to...